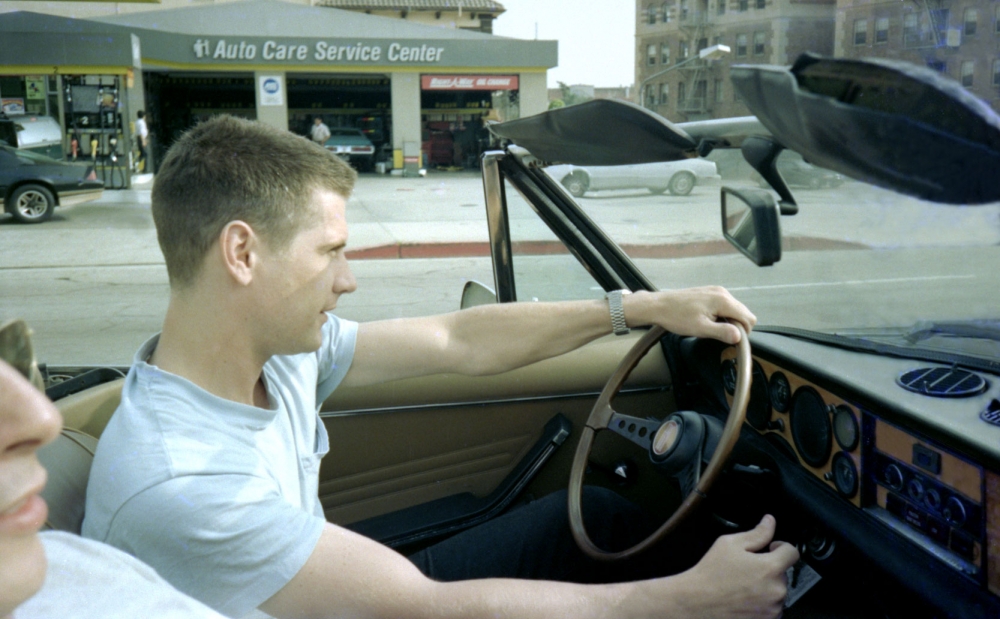 A painting of a real thing. I assume some painters love the feeling of canvas and others want to remove it. Some cars, I think, are painted in a way to remove the sense of metal, hardness, and other cars are painted in a way to accentuate the fiberglass. The difference between shutting the door of a 1970s Barracuda and a BMW today. You can probably tell who was born in the 1960s by the way they slam a car door, used to the heaviness of steel, always surprised by the way new doors practically shut themselves.

I was born in the 1960s. We didn’t have to wear seatbelts at first. The back seat of my mother’s GTO was a giant maroon slippery vast vinyl canal. I have written about that car many times over the years. Everything about it was bigger faster heavier louder cooler than anyone else’s mother’s car in the entire state of New Jersey. Gas station attendants, who I didn’t want to date but wanted to be, oohed and ahhed over the car. It was the first car I felt was an extension of my body, because it was driven by a woman and it was envied by men. Cars generally didn’t seem to be extensions of women, women seemed at that time to be decorations, living hood ornaments. The door of this car was gigantic. Like the hood of a normal car. So we were three, my mother and me and my brother in a big fast gas-guzzling period-colored GOAT.

That’s part 1. Of course the car got sold, my parents got divorced, my mother went to social-work school and got a Toyota Corolla. I got my father’s souped-up Oldsmobile Cutlass Supreme. It had a modified 455-cubic-inch engine and racing mag wheels, and even though it had four doors and corduroy seats, it was a ’79 Trans Am. I didn’t test its speed, but when I went to college my brother did, and the car ended up in a lake. I did my own damage later, borrowing the Corolla when my mother was on vacation and making a left-hand turn from the right lane on Houston Street, crying over a breakup. It was raining, I was fucked. It was 1986. I didn’t really drive again.

I remember Peter Cain’s paintings. They fit and didn’t fit with what I was looking at at the time. I thought about the Mel Ramos painting I would see passing by Louis K. Meisel Gallery. Never going in, we never went in. I was working for Peter Halley and Richard Prince at the same time that Peter Cain was obsessively painting cars. Peter Halley traded a painting to a collector for a Porsche. I gave Richard Prince a book my father wrote on the Buick GNX. Peter Halley made paintings in two parts with stripes, and Richard used house paint to make a giant color-field painting with a thinner painting hung below it. Almost like two-door cars. Sporty painting. The way in which works work off each other is fascinating.

Richard told me about the writer Harry Crews and a book called Car. I wonder if Peter Cain read Car. He must have, or I hope he did, because I’m mentioning it here in hopes that someone will say, “Of course he read that. You aren’t just coming up with some idea that is unrelated. This relates.” So, in Car a guy who feels overpowered by power, underwhelmed by his own performance, sets out to eat a car. The story, as it turns out, somehow relates to Japan, because I could see this happening in Japan, only it would involve ropes. Anyway, to eat a car, if you really doubt this is possible, you have to cut it down. Into portions. Shrink it, deform it. To consume it you have to reinvent it. Change its body. Change the scale, like how a painting of a car no longer has the weight but maybe still has the impact.

My father, who is a renowned auto journalist, went to a book signing a few years ago, and a girl came up with the door of a Camaro for him to sign. I’ve been in a room where Channing Tatum signed a woman’s breasts.

Until I saw the book Peter Cain: The Los Angeles Pictures, I had no idea that he looked like the kind of boys I liked in high school. The ones who didn’t pump gas but wore Timberland ski hats and could have been mechanics except their hands and hair were cleaner and they actually went skiing. I like to imagine I almost looked like Peter, if I wasn’t Jewish and was a guy. I read Jack Pierson’s beautiful little essay in the book, and he notes how handsome Peter was. Its wistful, this noting. It’s a privilege, you can tell, when one gay man notes the beauty of another. Sigh. He was both handsome and straight-looking. A kind of pinnacle. It counts in a different way. It’s the gateway to everything. More than the handsome, though, is the boyish. Paint, boy, car. Luxury. There is a luxury to this. It’s right that Jack, a photographer and a mortal, would note this. Just another separation between photographers and subjects and mortals and handsome men. This is a total aside, but I remember talking to Jack at a Mark Morrisroe opening a few years ago, standing in front of a nude self-portrait. I remarked to Jack, “That big dick must have come in handy, must have really helped him in his life,” and Jack said, “Well, when he was tricking a john shot him, and afterwards he had a limp, so I guess it didn’t help him in the end.” It may have been the perfect story. The perfect Jack moment.

Peter Cain died in the age of people dying of AIDS, but he didn’t die from it. I wonder how that serves his memorialization. Kind of interesting. He didn’t die of AIDS, his work wasn’t part of a group, it wasn’t really gay-ish. In most reviews of my work there is some note to my identification. I find it tedious. So I thought about it when writing about Peter Cain. I didn’t want to do the same thing. So that’s about it. If I write about loving boys or the look of boys or the trophies of boys, it’s about me as much as it is about him. So it’s kind of a straight thing.

My brother slept in a fiberglass race-car bed until he was fourteen.

Muscle cars are American sculpture and painting and photography. I know I was startled and excited when I first saw Peter’s work because it worshipped the only religion our family had, the steel garish show-off monsters my father would drive home every week. And suddenly what was half pride (how cool is that Indianapolis pace car parked in our driveway), half fear (why is everyone else driving a normal car that doesn’t scream), was suddenly a masterpiece. A thing moved inside and hoisted up and gentled and softened and quiet. In the same way one experienced one’s body when standing next to a Robert Morris or a Richard Serra, I experienced my memory of form for the first time when seeing a car that was not a car.

There is a term: Car Guy. It’s what people in the automotive business call the people, usually men, who were there for the Detroit heyday. The Big Three churning out these pure American dreams of power and freedom and expression. My dad is a true Car Guy. And they love those cars. You don’t want to see pictures of most of them. They weren’t drivers or teenagers, they were a kind of Mad Men, but the radicals. It’s a particular time in American history when high performance, aggression, trippy details, stoned-looking mascots, speed freaks, all that stuff was under the control of big corporations that were reaching out to the new drivers who were getting drafted or protesting the war. My dad, who edited a magazine called CARS, would get letters from kids in Vietnam saying how they were saving their pay to buy a Corvette. Meanwhile in Astoria, Queens, a kid called Chas bought a ’67 Corvette from the infamous Motion Performance hot-rod shop in Baldwin. He had an L88 engine dropped in and started to race it at drag strips. My dad, who wrote all the advertising copy for the shop, photographed that car a lot. It was a very fast car. Very. Eventually it broke the record, but that was after the kid, known as Astoria Chas, was killed in Vietnam. One day my dad showed me some of the pictures, because he realized that Chas, or Charlie as he was known off the track, was my type. I agreed. He was really my type, a beautiful guy with wavy brown hair and the confidence of a teen idol, or at least a guy who was very happy being a guy. But my Dad had only a few pictures of the boy. “I didn’t care about the guys driving the cars,” my dad said. “I just loved shooting the cars.”